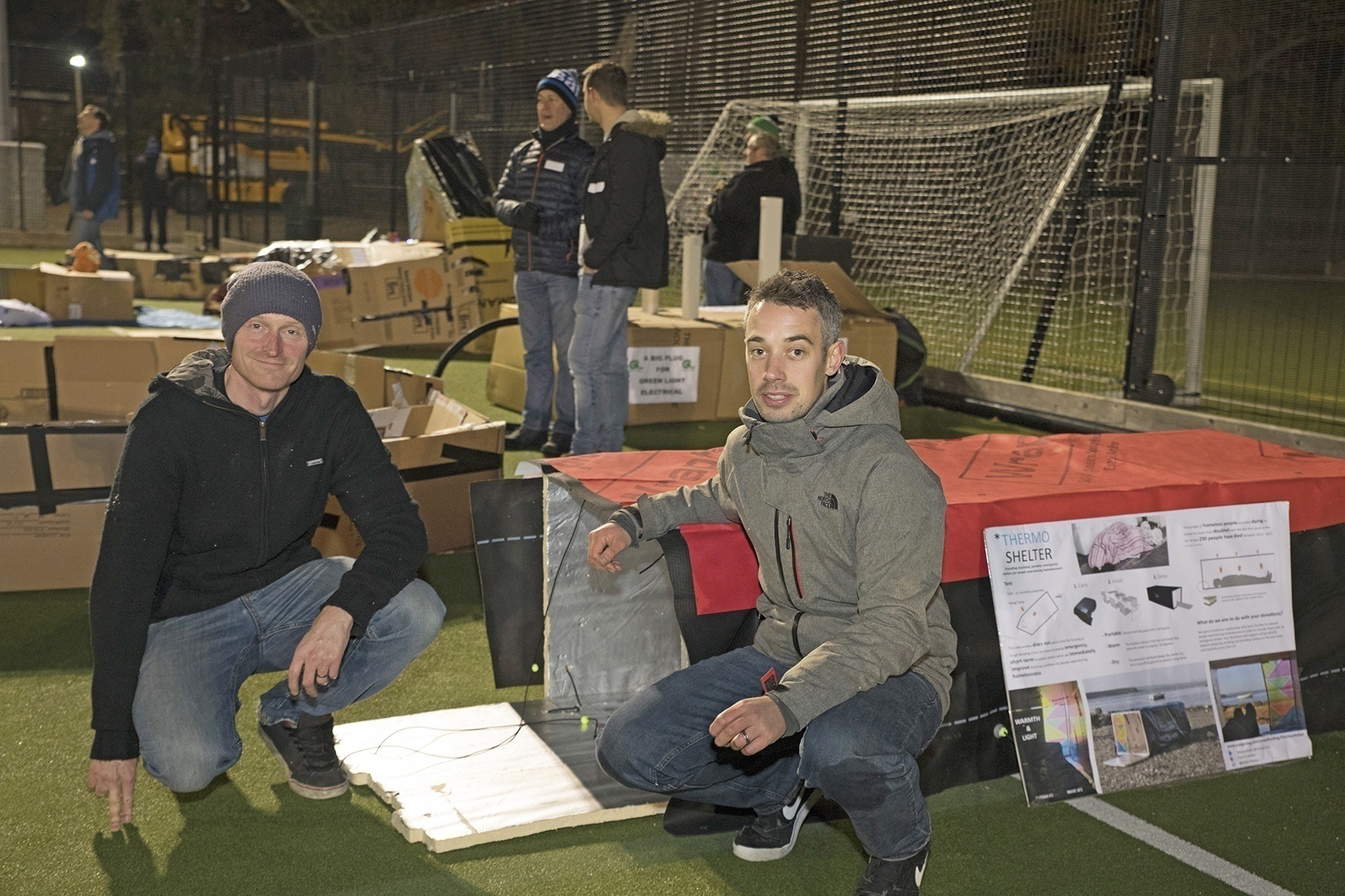 On Saturday 17th November, 2018,  Steve and Sam, along with around 100 other Bournemouth business people, gave up their comfortable warm beds in exchange for sleeping outside in the YMCA Bournemouth’s ‘BIG SLEEP EASY’.  Here is the official press release, courtesy of YMCA, which tells how the event went:

On the morning of Sunday 18th November, approximately 100 staff and directors from 23 local businesses and organisations, plus individual fundraisers, woke up in cardboard box shelters having slept overnight at YMCA Bournemouth’s ‘BIG Sleep Easy’ at Bournemouth Sports Club (Chapel Gate) As a result, approximately £25,000 is expected to be raised for the charity – a new record for a YMCA Bournemouth fundraising event and more than double the original target! 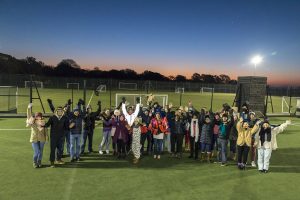 Participants awoke cold and tired but knowing that they had made a real difference in the fight against homelessness. Chris Palmer, Manager Director of local IT business AnyTech Solutions, who himself raised over £1600, said: “The AstroTurf was extremely firm and my hands felt numb, so I can’t imagine what it must be like sleeping in a doorway. But what better way is there to make a point about homelessness and raise awareness?”

The previous evening, on Saturday 17th November, fundraisers arrived at Bournemouth Sports Club at 6.45pm to be given large cardboard boxes and tape from which they or their team had to build a shelter. They were also presented with woolly hats and scarves: a selection of 100 created specifically for the event by Broadstone and other local ‘Knit and Natter’ groups supported by Douche Family Funeral Directors.

Sustained by hot soup, drinks and the warming thought of a breakfast bap in the morning, they applied their creativity to build and decorate some fantastic carboard structures, listened to a brief speech describing the work of YMCA Bournemouth and a poem about homelessness which was written for the occasion*, before bedding down around 10.30pm. 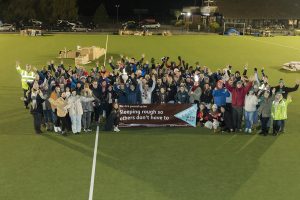 Local organisations taking part included solicitors Lester Aldridge, chartered accountants PKF Francis Clark, Battens Solicitors, IT Support Business, The WAY Group, Altogether Care, BH Living, Grapevine telecommunications, Hemsley Financial Services, LMA Architects, Kuehne + Nagel, A-Storage, Globacare insurance, South Coast Payments, Newnham & Jordan solicitors, Make Studio, Calvary Pentecostal Church, RIAS insurance, Green Light Electrical Installations Ltd, Lewis Investment and Marah Recruitment.  Debbie Corbin of Corbin & Co Estate Agents was the first person to sign up: “We decided we wanted to give back to the local community and we chose a cause associated with our business. We realise that there are people without the opportunity to have their own home so we wanted to support YMCA Bournemouth in the work they do providing homeless people with the tools and resources to get a home for themselves.”

Managing Partner of Lester Aldridge solicitors, Matthew Barrow, was one of a team of 17 who raised over £6000: “We were looking at community engagement because it’s something we think we should do as a business. YMCA Bournemouth is an integral part of our community and by taking part in this event we are helping to change the local social landscape. Homelessness is something that can happen to anyone – a single life event and anyone could be there.”

This thought was echoed by Cllr Lesley Dedman, Mayor of Christchurch, who spent time at the event and was invited to judge the ‘Most Creative Shelter’ competition: “It’s an issue close to my heart. My own family, many years ago, went through hard times and nearly lost our house. I know how easy it is to find yourself slipping down the road of being unable to cope. This event is fantastic: I’ve met so many people happy to experience an uncomfortable night to help others.”

Earlier, the Mayor and Mayoress of Bournemouth, Cllr Derek Borthwick and Mrs Dorothy Borthwick had also visited to show their support: “These events are fantastic,” said Cllr Borthwick. “People have turned out to make themselves aware of what’s happening outside their front door. We have to be thankful for those who are devoted to looking after those who really are in need.”

The event attracted individual fundraisers as well as businesses. Tim Spring was one of the solo fundraisers: “I’m really pleased to be here,” said Tim. When I was 15, I spent time sleeping rough because of a poor domestic situation. My resounding memory wasn’t the cold, it was the feeling of isolation, vulnerability and above all how slowly the time passed.

“I think it’s very easy to use dependency issues as an explanation for homelessness to smooth our own consciences when in reality it’s due to poor mental health provision or other reasons. Some very stereotypical things are expressed by some of my other middle-class friends and I would like them to think about it more deeply.”

One fundraiser, Robyn Strange, even gave up her 30th birthday celebrations to sleep rough for the night! She raised well over £300. “I’ve had a bit of a hard year and I thought it would be nice to give something back and have a 30th to remember,” she explained. “Everyone’s been really chatty and it’s been great. We would definitely do it again.”

Martin Stockley, Senior Operations Manager at YMCA Bournemouth, Poole & Christchurch, said: “The interest, support and participation we received was nothing less than remarkable. Each and every person was dedicated to making a positive and long-term difference to the lives of individuals in need and it was a personal honour to meet them. The experience will certainly have changed people’s perception of the harshness of sleeping rough. Our sincere thanks, and admiration, to all those involved.”

If you would like to show your support you can still make a donation at https://mydonate.bt.com/events/bigsleepeasy. If you or your business are interested in taking part in a future Sleep Easy event in either spring or autumn next year, you can email YMCA Bournemouth on fundraising@ymcabournemouth.org.uk.